A British private hospital has adopted disposable hijabs for its Muslim female doctors.

In a tweet, the Royal Derby Hospital said it was the first hospital in the UK to adopt disposable hijabs, which were introduced by Malaysian-born doctor Dr Farah Roslan.

“We are proud to be national leaders in good practice and inclusiveness. We believe we are the first Trust in the UK to introduce sterile disposable staff scarves for use in our operating rooms thanks to former Royal Derby Hospital medical student Farah Roslan, ”the Royal tweeted Derby Hospital.

Social media users have praised the incredible initiative taken by Derby Hospital in the UK.

Dr Roslan called the invention the need to strike a balance between the Muslim dress code and the passion of being in the operating room. “I am so happy that my vision has become a reality and that these scarves are now available to all staff.” 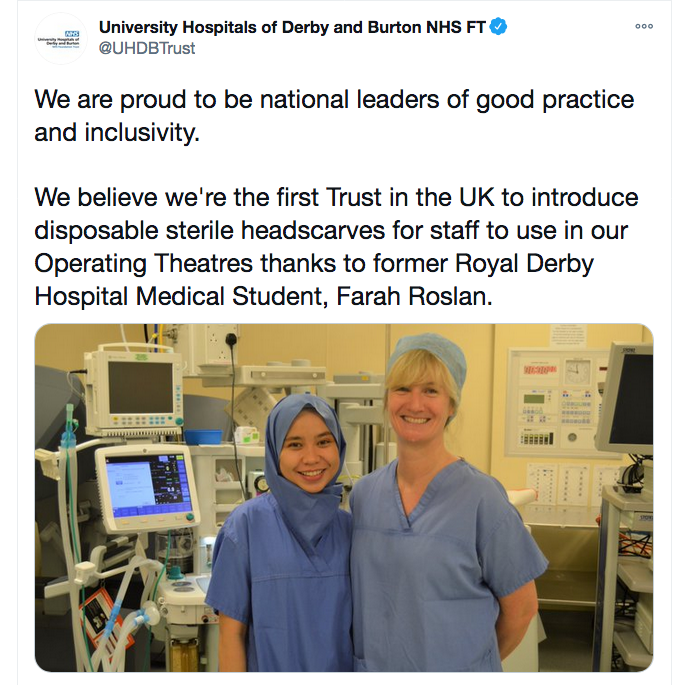 Speaking to BBC Radio Derby, Dr Roslan said disposable scarves offer a solution to infection control issues with hijabs, which are typically worn throughout the day.

“I had used [the same headscarf] all day which was obviously not clean and ideal. I didn’t feel comfortable taking it off and was removed from the theater, respectfully, due to infection control. “

Dr Roslan drew inspiration from Malaysia, his country of birth, for inspiration. “I’m really happy and can’t wait to see if we can endorse this nationally,” she said.

Her mentor Miss Tierney, a colorectal surgeon, said the hijab is a “low key issue in operating rooms across the country” that has not been officially addressed. “It didn’t cost much and I hope the effect will be huge.”

A new work by the elusive street artist Banksy, honoring health workers, has been unveiled…