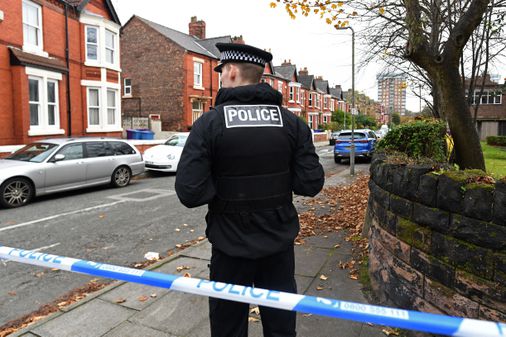 LONDON (AP) — British police said Monday that an explosion in a taxi outside a hospital that killed a man was caused by an improvised explosive device and is being treated as a terrorist incident, but the motive remains unclear.

Russ Jackson, head of counter-terrorism policing in the North West of England, said Sunday’s blast at Liverpool Women’s Hospital was caused by “ignition of an explosive device” introduced into the vehicle by a passenger.

The male passenger died in the explosion and subsequent fire, and the taxi driver was injured.

Jackson said “investigations will now continue to seek to understand how the device was constructed, the motivation for the incident, and to understand if anyone else was involved.”

Three men in their 20s were arrested elsewhere in the city under the Terrorism Act on Sunday, and a fourth was arrested on Monday, he said.

Suspicion over the motive for the blast was aroused by the timing – just before 11am on Remembrance Sunday, the time when people across Britain hold services in memory of those killed in wars .

Jackson said investigators couldn’t find a connection to any memorial events, “but that’s a line of investigation we’re pursuing.”

“Although the motivation for this incident remains to be understood, considering all the circumstances, it has been declared a terrorist incident,” he told a press briefing.

He said the passenger was picked up by the taxi 10 minutes away and asked to be taken to hospital, where the blast happened. The driver, named locally David Perry, managed to escape from the car. He was treated in hospital and released.

Liverpool Mayor Joanne Anderson said the taxi driver locked the doors of his taxi so the passenger could not leave.

“The taxi driver, in his heroic efforts, managed to divert what could have been an absolutely horrific disaster at the hospital,” she told the BBC.

Nick Aldworth, a former senior terrorism investigator in Britain, said the taxi appeared to have suffered “a lot of fire damage with very little blast damage”.

He said “everything in that vehicle was either low performing, not working properly, or possibly an incendiary. So I think it’s entirely possible to debate what happened right now. »

Britain’s official terror threat level is “substantial”, the middle rung on a five-point scale, meaning an attack is likely. The Joint Terrorism Analysis Center establishes the threat level based on international terrorism intelligence at home and abroad.