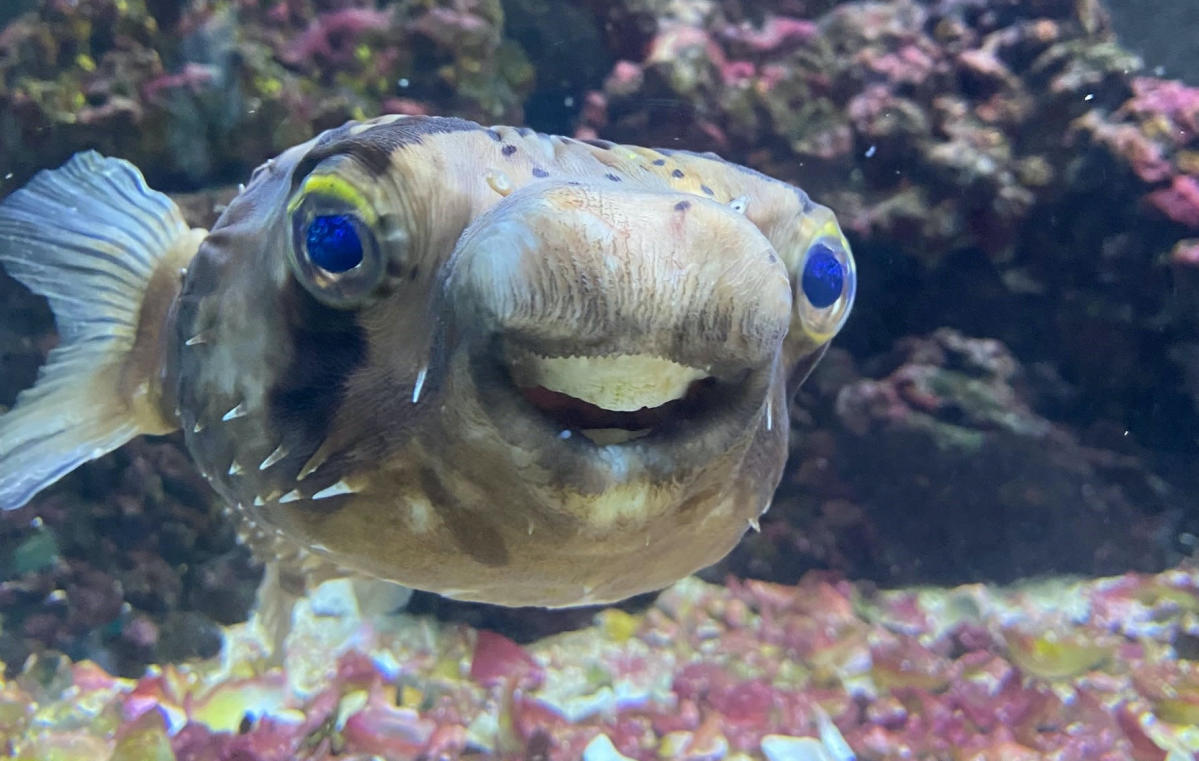 A fish had to be rushed to an animal dentist to have its teeth sawed in half after growing so long it was unable to eat.

Goldie the porcupine pufferfish was in danger of starving to death because of its giant teeth, prompting concerned owner Mark Byatt to take the five-year-old fish to the vet.

Experts at the Linnaeus-owned Sandhole Veterinary Center in Snodland, Kent, calmed the pufferfish, then used a special saw to gently cut its teeth in half so it could eat.

Veterinarian Daniel Calvo Carrasco said: “The porcupine pufferfish’s teeth are known as beaks and grow continuously throughout their lives.

“They are usually kept short naturally, as they are depleted from their usual diet of hard-shelled foods, but, although these foods are provided in her home environment, she is not as willing to eat them as her others. tank mates.

“As a result, the upper part of his beak grew to the point of hampering his ability to eat efficiently.”

He said: “Goldie was introduced to the practice in a large waterproof container with water from her home tank and an approved fish anesthetic was placed in the water until she reached a slight level. anesthesia.

“To further support it, the water has been oxygenated everywhere.

“This meant that she was still breathing well throughout, but could be maintained for brief periods out of the water without becoming overly stressed.”

Veterinary nurse Debbie Addison held Goldie in a damp towel to prevent her from drying out or triggering the infamous defense mechanism that sees the puffer fish swell to twice its size.

While she was holding the fish, Carrasco was able to use a dental drill to cut off the upper beak and cut it in half.

Goldie was then placed in a tank of water from her home tank to recover.

“The whole procedure went wonderfully and was done in less than an hour without any stress and Goldie was home and eating well within two hours.”

Goldie is now back in her tank home in Leybourne, Kent, following the procedure earlier this month.

Her relieved 64-year-old owner said: “About three months ago we noticed her front beak was growing very rapidly as she ate cockles in the shell every day.

“We don’t know why Goldie’s teeth never really got to grind naturally, but we knew we had to get them filed, even though we didn’t know how to achieve that.

“I was also very concerned about the process of bringing Goldie to surgery, as transporting large tropical fish is not without risk.

“We’re just thrilled to have Goldie back home. She’s thriving in her tank and nothing worse for her dental visit.”

Watch: What are the health risks caused by plastic