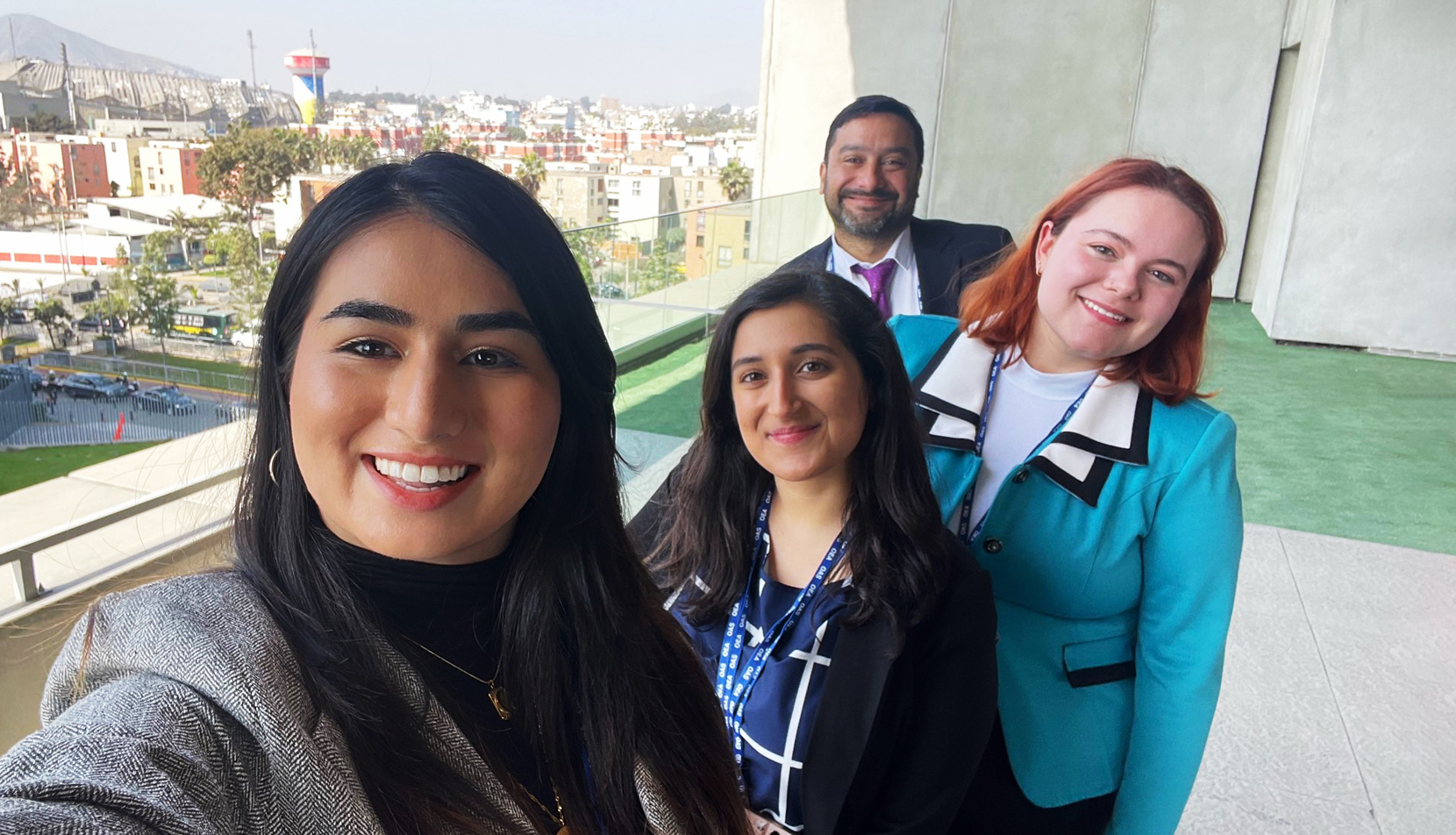 Students from the University of Virginia School of Law’s International Human Rights Clinic attended the 52nd General Assembly of the Organization of American States in Lima, Peru, in October. The students – Salwa Ahmad ’24, Layla Khalid ’23 and Sabrina Surgil ’24 – recently shared some of their experiences there.

We have been tasked with uncovering the barriers to participation that civil society organizations face in the OAS Dialogue and suggesting ways to improve the structure of the meeting to ensure that all voices are heard equally. way. In recent years, this dialogue has become more contentious as polarizing issues such as abortion, women’s rights and LGBTQ+ rights have dominated discussions between some coalitions.

Prior to the trip, we researched and reviewed videos of past civil society dialogues, but saw firsthand how diplomacy and human rights advocacy are conducted in multilateral spaces.

The theme for the 52nd General Assembly was “Juntos contra la desigualidad y la discriminacion” – which means “Together against inequality and discrimination” – and the phrase was inscribed on the backstage behind the heads of member states. The stage was surrounded by the flags of the 35 member states of the OAS.

On day one, we had the pleasure of attending this year’s Official Civil Society Dialogue, where we saw representatives from 31 coalitions deliver three-minute speeches on pressing human rights issues affecting their region.

At the start of the dialogue, Peruvian President Pedro Castillo stressed that decisions cannot be made without the contribution of civil society. Highlighting the goal of dialogue – to listen to one another – OAS Secretary General Luis Almagro spoke about the importance of being tolerant of those who think differently.

Yet, instead of constructive dialogue between coalitions and state officials, we have witnessed a tense atmosphere between conservative and liberal organizations and members of the public. We noted the obstacles that can arise even in an open platform designed for dialogue, such as inflammatory statements that elicited loud cheers or boos from the audience. We have also seen the frustration that civil society organizations feel when they feel that their human rights concerns are not actively heard or taken into account by member states.

During day two plenary sessions, we heard US Secretary of State Antony Blinken speak on behalf of the United States about the inequalities that prevent our communities from reaching their full potential. We also had the opportunity to witness negotiations between Member States on several ongoing resolutions.

Since most of the speakers delivered their speeches in Spanish, we had access to headsets where we could hear interpreters delivering English and French translations. It was fascinating to listen to fluent conversations happening simultaneously in multiple languages.

Salwa Ahmad and Layla Khalid listen to the OAS meeting in translation.

After the dialogue, we asked coalition members about their thoughts on how the dialogue is conducted and whether they feel their voice is heard. Throughout our stay in Lima, we met with various coalitions representing communities of indigenous groups, people of African descent, women, LGBTQ+, and religious and spiritual groups. They provided insight into the history of these coalitions and how the dialogue has evolved over time.

Similar to the increased polarization of US domestic politics in recent years, the OAS dialogue has shown what the breakdown in mutual understanding and communication can look like on an international scale, between sovereign nations. Despite these challenges, witnessing the passion that civil society organizations bring to their advocacy efforts gave us hope that with improvements, the dialogue can evolve into a meaningful and productive platform for all. the participants.

Apart from the official OAS debates, it was wonderful to discover the culture and geography of Peru. On our first evening in Lima, we found ourselves surrounded by garúa, a coastal fog, and learned that this was part of Lima’s climate as a rainless city.

By exploring parts of the city, we were able to practice our rusty Spanish skills. We found that we could understand the language better than we could speak it, but by the end of our trip we had smooth conversations with shop owners, waiters, and other locals.

From Miraflores to Barranco, the coastal views, vibrant street art and delicious food were incredible. We ate potatoes in more forms than you can imagine and drank the tastiest cups of coffee. The people we met gave us a warm welcome and introduced us to their history, their culture and their cuisine.

We are so grateful to have had the opportunity to attend the OAS General Assembly and see diplomacy in action in another country. It was the first time either of us had visited a country in South America. Although it will certainly not be the last of our trips to this continent, our experience in Peru will remain unforgettable.