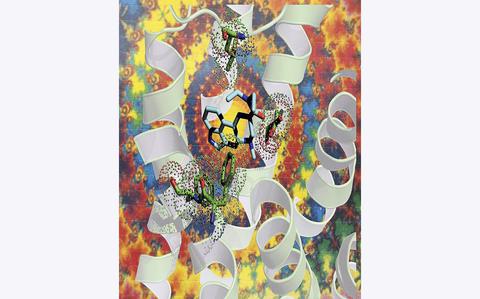 An artistic representation of LSD (in blue) inserting into a serotonin receptor (the white ribbon). (Bryan Roth/National Institute of Health)

MIAMI (Tribune News Service) – Gurus of psychedelic-era American pop culture have touted the “acid trip” experience. But the US government and much of the public remained suspicious of LSD, with President Richard Nixon declaring it and other drugs “public enemy No.

Today, half a century after Nixon launched the war on drugs, a private Miami-area research clinic launched a federally-approved clinical trial to test LSD as a possible treatment for generalized anxiety disorder. .

The landmark trial – touted by the drug developer as the largest study of LSD for potential commercial use ever conducted in the United States – reflects a growing body of research that suggests these hippies may have been onto something: that the mind-altering power of LSD, mushrooms, and a host of other hallucinogens—if given in controlled amounts under medical supervision—could have beneficial properties, particularly in the treatment of psychological problems.

The inaugural dose of the latest trial was administered to a patient on August 24 by Segal Trials at its Miami Lakes Psychedelics and Cannabis Research Center.

The proprietary “pharmaceutically optimized” form of LSD is named MM-120 and is owned by MindMed, a small New York-based psychedelic biotech company. MindMed’s study could be an important step in the long process of bringing a new treatment for generalized anxiety disorder to market. The study covers 20 clinics nationwide, including Segal Trials.

“There are more patients here who are suffering from anxiety and are not having enough access to treatment, or the treatment is not meeting their goals,” he said. “As a geography, we are ideally positioned for this in Miami. We have a wide range of diverse patient populations.

The study, which is launching a second phase, is designed to both monitor the effects of the drug and to find the most effective dosage. Patients will receive one of four different doses while others will receive a placebo. Segal Trials will likely bring 10 to 20 of the 200 patients MindMed is testing into this second phase.

Patients receiving doses will be monitored in a room designed to feel more like home than in a sterilized clinic. The first Miami Lakes patient, Kakar said, lay on a couch under the influence of drugs — helmet, eye mask and blanket provided. Two guides experienced in supervising psychedelic-assisted psychotherapy followed the patient for the duration of his psychoactive effects, which Kakar estimated at around 12 hours.

Psychedelics – like LSD or “acid”, psilocybin or “magic mushrooms”, among others – are not new, neither in a recreational nor therapeutic context. Psychoactive drugs were widely studied and administered to combat alcohol addiction, post-traumatic stress disorder, anxiety, and depression in the United States until they were criminalized in 1968. oday, after a steady increase in community demand, they are reentering psychiatric research in a big way.

The past decade has been fruitful for research. Promising studies of psilocybin as a treatment for anxiety, depression and addiction have multiplied alongside research on MDMA (methylenedioxymethamphetamine) – the “club drugs” more commonly known as ecstasy or molly – in as a potential treatment for post-traumatic stress disorder and addiction.

LSD was also widely studied, but mostly before the 1968 ban. The National Institutes of Health funded over a hundred grants to study the drug before it was banned. Some of these studies have also found use for the compound in alleviating anxiety and addiction. Bill Wilson, founder of Alcoholics Anonymous, credits LSD with helping him on his path to sobriety.

These studies and breakthroughs largely dried up after the ban. But studies like MindMed’s are sparking renewed interest in LSD and a wide range of possible psychedelic treatments.

Joseph Lichter, a chemist who teaches a course in “Psychedelic Rebirth” at Florida International University’s Honors College, believes such research could hold promise for the future of American psychiatry. Mind-altering substances have been feared or considered dangerous for decades, but they are powerful, non-toxic compounds that captivated scientists and researchers long before they were banned.

“We definitely need to see more science before we start getting these things into the hands of healthcare professionals to use with clients, but it’s really good for us to be working to de-stigmatize LSD.” , said Lichter. He thinks there’s no better place to launch a psychedelic renaissance — a resurgence in taboo substance research — than Miami-Dade County.

“Every time something happens here in Miami-Dade County, I get excited because we’re a big metropolis,” Lichter said. “I think the psychedelic revival right now is in a period of intense research, and things like the trials at Segal are the right steps forward.”

Clinics offering the psychoactive sedative ketamine already exist throughout the county. Psilocybin has also gained medical popularity; Segal Trials conducted its own trials of psilocybin-assisted psychotherapy for the treatment of depression at its Miami Lakes center last summer.

“There’s such a surge of interest, there’s such an unmet need in our community in this particular area,” Kakar said. “And psychedelics seem to be becoming more normalized in the minds of patients and communities instead of being on the fringes of recreational use.”

What sets MM-120 and other psychedelic treatments apart from more traditionally prescribed treatments for anxiety and depression is the duration of the effect. Rather than everyday use, the drug candidate is being studied as a one-time treatment that promises – at least potentially – long-lasting benefits.

“Unlike current drugs which have to be taken daily for a very long time and which hopefully have an effect realized several weeks later, we believe that if this drug is taken once under structured conditions, it can have a potential effect on anxiety it lasts a very long time,” Kakar said. “So we think it works in a very different pharmacological way than any other drug that has to be taken daily.”

Robert Barrow, CEO of MindMed, touted the potential in company press releases, pointing to a recent research paper from a partner in the MM-120 study.

“This article further reinforces the positive preliminary evidence for LSD in patients with anxiety disorders,” Barrow said. “Acute administration of LSD produced long-lasting and significant reductions in symptoms of anxiety and comorbid depression for up to 16 weeks. These results are encouraging.

It is unclear how long the second phase of the trial will last. Once there is sufficient data from all participating sites, MindMed will approve a specific dose of MM-120 to be studied in phase three. The third and final phase will test a larger number of patients with only the approved dose. This will be the final step before MindMed can submit the drug to the Food and Drug Administration for approval and possible future prescription use. The company estimates that the whole process will be complete by November next year, but that could be subject to change if the phases drag on longer than expected.

But despite the promising research, LSD is arguably the worst rap of all psychedelics. The drug has a tarnished reputation for being associated with counterculture, anti-war protests and “bad trips”. It is potent even in small amounts, and when taken in too high a dose or in an unstructured environment, it can cause extreme stress or dangerous conditions for the user.

The stigma attached to LSD is the reason Lichter teaches his students a phrase coined by Humphrey Osmond, a British psychiatrist who coined the word psychedelic.

“‘To fathom hell or become angelic, just take a pinch of psychedelic’ is the phrase Osmond coined,” Lichter said. “There is a risk of going to a hellish place with this compound or a potential of going to an angelic place. We all have to have this recognition that there is a huge risk.

But, he said, there’s a lot of room between those extremes, and the potential benefits are too enticing for some scientists not to support.

“It’s actually just a chemical compound that binds to a serotonin receptor and causes changes in the way people think or feel,” Lichter said. “And if that change can actually help them, as some of these studies show, we need to de-stigmatize it and give it hope, give it the attention it deserves.”